The tracklist of the soundtrack from the upcoming Fred Hampton biopic Judas And The Black Messiah arrived today and while some tracks, like Nas’ “E.P.M.D.” and Jay-Z and Nipsey Hussle’s first-ever collaboration, are drawing excitement, fans have noticed the absence of one notable performer’s alias. Noname, who has been one of the most outspoken modern disciples of Hampton’s revolutionary philosophy, wasn’t on the album’s tracklist — but that doesn’t mean no one asked her to be. When prompted by fans, she explained that she was originally billed to be on the soundtrack but opted out.

“i hope people actually go study fred hampton’s analysis on u.s imperialism and fascism beyond just seeing a movie,” she wrote on Twitter. “most of his politics were stripped from that film.” Given the controversial nature of Hampton’s views, this is somewhat disappointing but not surprising. However, because picking on Noname has become a favorite Twitter pastime, one fan decided to take a jab. Things didn’t go the way he expected, though, as Noname deflected his criticism and explained her reasoning for not being on the soundtrack.

“This why they ain’t put you on the soundtrack sis,” wrote the fan. “what’s crazy is they asked,” Noname replied. “i was supposed to be on the song with saba and smi but after seeing the movie i decided to pass.” Noname, Saba, and Smino previously partnered to form the collective Ghetto Sage, releasing a pair of tracks in 2019 to hype a potential album, but so far, there hasn’t been any more word on their project since. This track would have been a welcome addition to their catalog, but it looks like Noname stands on her principles above anything else. 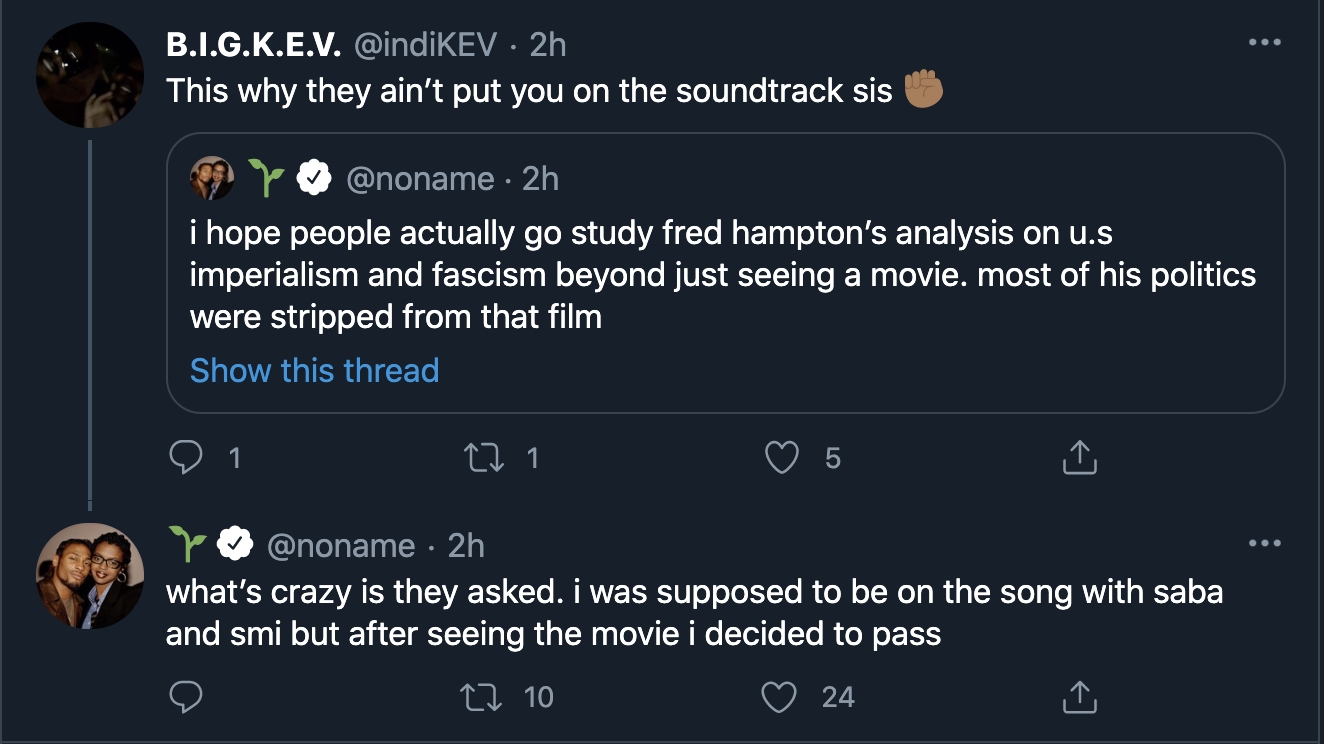 For what it’s worth, she has been consistent in expressing and defending her views, and she spent some time elaborating on Fred Hampton’s politics for her fans on Twitter. Her book club has also been consistent in sharing literature consistent with Black revolutionary theory, so she isn’t just tilting at windmills. Some fans — and peers — may not appreciate her outspokenness, but considering Hampton’s own words, he’d likely stand with her more than most of the other names on the tracklist.

it was shot beautifully, the acting was amazing. but it’s a movie about an informant. fred is secondary and his radical communist politics are centered, at all.

Judas And The Black Messiah premieres on HBO Max Friday, 2/12.

Source: Noname Explains Why She Turned Down Being On The ‘Judas And The Black Messiah’ Soundtrack